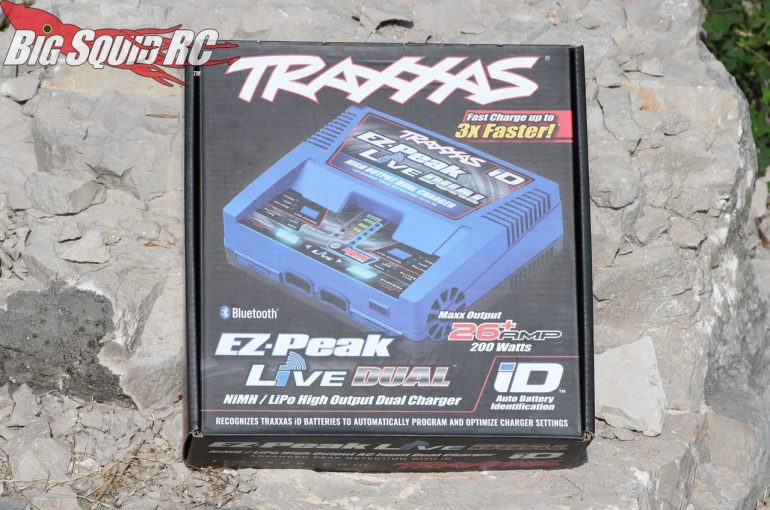 The world of batteries chargers has changed immensely in the last decade. Now days you can make parameter changes via a smart device, plus modern chargers can charge at rates unheard of not that many years ago. One of the latest battery chargers to hit the market is the Traxxas EZ-Peak Live Dual iD. The Live Dual comes with a slew of high-zoot features and promises the ultimate in ease of use. How well does the Live Dual charge a pack? Is it really that easy to use? Read on for our take on the Traxxas EZ-Peak Live Dual iD.

What’s In The Box: Inside the box you’ll find the charger and a paper manual. By the way, the manual was very well done and exceptionally easy to read.

Build Quality: Our test animals could find no fault with how the charger was put together.

Set-up Notes: We used the charger on numerous Traxxas iD packs. Some packs were LiPo while others were NiMH. Cell counts ranged from 2 to 4S on LiPo.

Ease of Use: Yes, the EZ-Peak Live Dual iD is an incredibly easy charger to use on Traxxas iD packs. In fact, it doesn’t get much simpler, you plug in a pack, then hit one button. The iD connector on the pack you are about to charge tells the charger its capacity/cell count/etc, that way the charger can automatically set itself for a high quality (and safe) charge. Also, the Traxxas EZ-Peak Live app makes is super easy to change settings. Awesome stuff, if your packs have iD connectors.

If you don’t have a bunch of packs with iD connectors, you can still use the Live Dual, but you’ll need to solder up some adapters (or buy some from your LHS).

Power: The Traxxas is no joke when it comes to power and for some reason we just loved hitting its green “MAXX Charge” button. You can charge one pack at up to 16 amps, while on the other “bank” you can charge one at 10. That is a lot of juice and can really help to shorten charge times. For example, on the right “high current” side of the charger, you can charge an 8000mAh LiPo at 2C, no small feat in itself, then on the other port you can be charging a 5000mAh LiPo at 2C. Our staffers typically never charge above a 2C charge rate and we found that the Traxxas had more than enough power for our daily charging needs. We also found that going to “MAXX Charge” did shorten charge times when we were in a hurry.

On the Track: For testing we ran packs charged on the Traxxas up against packs charged on our iCharger 308. We would charge up a pack on the Traxxas, then charge it on the iCharger (or vice versa), then we had our drivers hit the track to see if they could tell a difference in power. This being a “blind” test, our test drivers were not told how the packs were charged before driving.

After running a bunch of packs among various test drivers, we just couldn’t tell a difference between packs that were charged on the Traxxas vs the 308. Our test drivers noted strong low end, as well as strong power up top after driving dozens of packs. In our opinion, the Live Dual did a solid job of putting a high quality charge into our packs.

Final Verdict: If most of your packs are Traxxas iD LiPos or NiMHs, then the EZ-Peak Live Dual iD is perhaps the perfect charger for you. The charger is quite powerful, super easy to use, but even more importantly, it works in a very safe manner. The Traxxas iD connector technology ensures a perfect charge rate, thus eliminating the biggest cause of LiPo problems- human error.