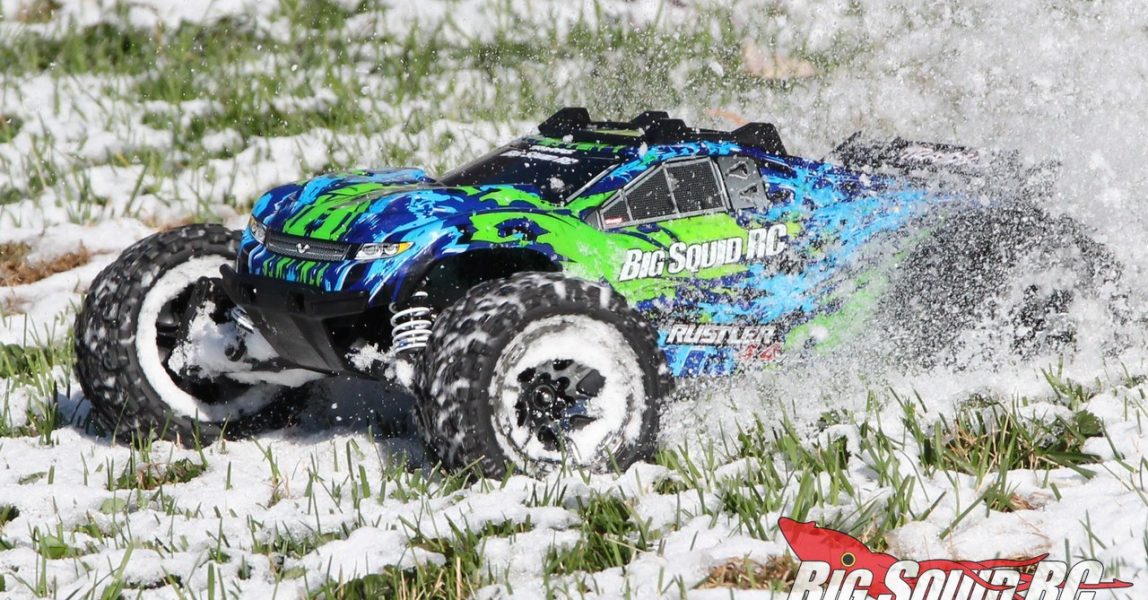 Over the last couple of decades, the 2wd Traxxas Rustler has become one of the most iconic bash vehicles in history. The 2wd Rustler was a huge seller when released and today it remains a top seller. For 2018 Traxxas upped their ante with an all new Rustler 4×4. Not only does the latest Rustler sport an aggressive 4wd system, but it also has a burly VXL brushless power system to go along with an entirely new chassis design. How well does the Rustler 4×4 hold up? How fun is it to bash with? It is the ultimate 1/10th scale basher? Read on to find out…

Primary Competition: Some of the competitors to the Rustler 4×4 are the Tekno ET410, the ECX Circuit 4wd, the Thunder Tiger Sparrowhawk XXT, etc.

What’s Needed To Complete: You don’t need a whole lot to get the Rustler 4×4 up and going, just some AA cells for the transmitter, a 2 or 3S LiPo pack for the truck, and a battery charger.

Build Quality: Straight outta the box we could not find a fault with the build quality of the truck. The bolts were tight but not stripped, the shocks were well filled, the pinion/spur mesh was spot-on, etc.

Test Venues: We tested the Rustler 4×4 at a number of local parks, our local 8th scale off-road track, plus the demo area at the 2018 edition of the Rocky Mountain Hobby Expo.

Set-up Notes: Bone stock bro. No, we didn’t change any settings, we tested the beast bone stock. Power was supplied by Traxxas 2 and 3S LiPo packs, while a Traxxas iD Live took care of all the charging duties.

Turning: Not bad! The crew at Traxxas set the Rustler loose on the world with decent spring/piston/oil settings, along with well-though weight distribution, so the truck turns well. There are times on looser surfaces when the front will push going into a corner, but most of the time it goes where you point it to go. Turn-in at corner entry was well planted and it tended to stay that way through the apex. At corner exit, depending on just how much power you let loose, the truck can either stick quite well, or point the front tires at the sky. In the latter case, when you punch it hard out of corners there isn’t any steering (because the front tires are in the air!), but with a bit of practice you can dial in just how much gas you can give the truck before those front wheels aim skyward.

Jumping: While sprung and damped a bit on the light side for huge jumps, typically the Rustler 4×4 would land well from “normal” amounts of airtime (from less than a few feet). The truck’s 4wd system did a great job of correcting pitch while up in the air, it took just a stab of brake to bring the nose down, or a blip of gas to bring the nose up whenever needed. Ruts on jump faces would sometimes kick the truck at odd angles, but on smooth faces the truck was easy to launch nice and flat.

Bumps/Whoops: Oh ya, the Rustler just loves to gobble up rough sections of dirt, gravel, etc. While the damping is just a bit on the soft side for 50 mph+ whoop-de-do passes, the general geometry of the truck seemed to love going into the ugly stuff WFO.

On-Road: While not designed for pavement use, the Rustler 4×4 is loads of fun to drive on-road. On occasion it will traction roll when catching an edge, but mostly it was WFO and good times for the Rustler on-road. Its shocks easily handle any road joints or pot holes, and its brushless power system always had enough rip on tap to keep things interesting. Speed runs were tons of fun, as were long wheelies.

Grass: We found that our Rustler 4×4 VXL did a great job in grass. The stock tires do a solid job, but what really makes it a beast is its 4wd system and brushless power system. When you combine all the factors, the Rustler 4×4 is a straight up animal (for a 1/10 scale) in grass. Shorter grass is simply ignored, while taller grass tends to get chewed up and spit out the back at high speed.

Tires: As an “all around” tire, the stock Talons work fine. They last a long time and provide their best grip in loamy soil, grass, and in light mud. While not particularly scale looking, they look tough and do exactly what they are supposed to.

Power: If you are a first time driver, the Rustler is going to feel quite fast, and that is on just 2S. Pop in 3, and it feels about twice as fast. For experienced hobbyists the power is almost perfect. The low end hit is strong enough to get off the line hard, the mid-range absolutely shrieks by, then it just seems to keep pulling forever up top. Yes, there is serious power on tap, enough to do extreme stunts, catch insane amounts of airtime, or to throw massive amounts of roost.

Radio: Pretty standard stuff here, the Rustler ships with a Traxxas TQi which worked fine for us during our test period. Some people really dig the stock ergonomics, but most of test crew rated the radio as average for feel. We had no issues with glitching or range.

Broken Parts: We kinda feel like the Rustler 4×4 VXL is a tail of two cities. The shocks had issues ranging from popped caps to pulled rod ends. So while the stock shocks work fine during normal/backyard use, they tend to pop early when going big. After we repaired the shocks, we then took the torture up a few levels. When landing really hard, the front of the body does pop out once in a while, but the rest of the truck is basically a beast. We found it really hard to break, and had to send-it stupid style to finally rip off an entire front arm. So while the shocks might not be up for extreme duty, the rest of the truck seems to be highly capable.

We also liked the new battery tray/battery strap set-up. It is also like newer Traxxas designs and worked without issue for us. Now, we nearly always prefer Velcro straps for bashing as they allow us to mount up nearly any pack instantly, but the Traxxas battery tray (and strap) worked well enough for us.

The stock servo isn’t bad! It had decent speed and enough torque to turn the tires full-crank while sitting on carpet, much better than the average servo you will in a RTR.

We used the Rustler 4×4’s self-righting feature, and while it didn’t seem to work as well as on some of the other trucks from Traxxas, it did save us numerous long walks of shame.

Best Mod: Pro-Line shocks ASAP! The Pro-Line upgrade shocks not only work better, but are also much better suited for extreme bashing.

Time To Bash: B We had the Rustler 4×4 up and running in no time flat. Radio batteries are supplied, you just need to charge a LiPo pack up for the truck, then hit the backyard for some trigger time.

Workability: B Hex hardware and a nice open layout made wrenching on the truck quite easy.

Car Show Rating: B While there are not a lot of scale realistic parts on the truck, it does have a classic backyard basher look. The wheel/tire combo looked on-point, and the body’s graphics were sharp and well done.

Bash-A-Bility: B Except for the old school shocks, we found the Rustler 4×4 to be quite tank like.

Fun Factor: A Big air? No problem. Giant roost? All good. Wanna try and jump over that tree over there? Go for it, the Rustler 4×4 has the performance to have serious fun.

Handling: B For a vehicle straight up aimed at bashing, we thought the Rustler 4×4 handled quite well. It had good steering and was super easy to control while airborne.

Value: B A $399 price point for the latest in bash technology is a great dealio in our opinion. The truck works great and comes with a number of the latest features for bashing.

Parts Availability: B The Rustler 4×4 is still quite new to the market, yet we were able to easily find parts on-line, with even a few being already available at our local hobby shops.

BigSquid Rating: B+ The Traxxas Rustler 4×4 is a great bash truck. It isn’t too crazy fast on 2S, but when upping the cell count to 3S it becomes a legit over-powered beast. We had hours upon hours of fun with the Rustler 4×4, and we are confident you will too.