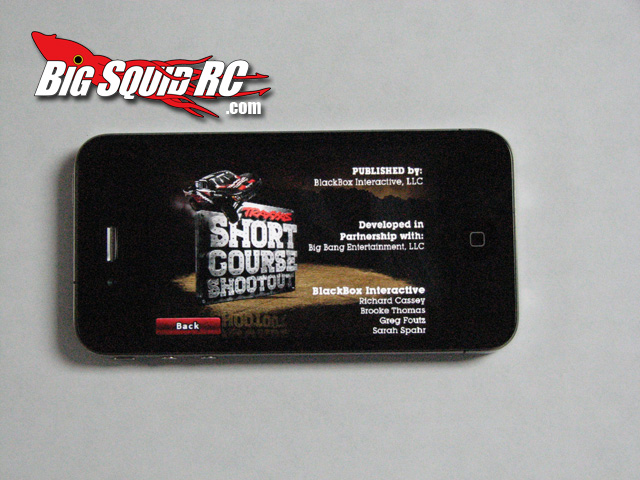 In an interesting twist for us and the RC world, there are starting to be more and more RC related phone Apps. When we found out there was going to be a Traxxas app, and it was going to be more than a gear checker or wallpaper viewer, it got our attention. So does Traxxas rule the app market with the Short Course Shootout? Keep reading to find out..

Game Play: It’s a game right? So we have to start with the fun stuff. There are a bunch of racing game apps out there. Some are really good, most are not. I would rate this one towards the top for fun. It’s a pretty simple game, that’s easy to play. It feels more arcade like than simulator, but I feel that’s a good way to go. If you try too hard for the ‘sim crowd’ you will loose a LOT of casual race fans.
There are a few options that can be set like Steering Assist and Auto Throttle. The Auto Throttle setting literally takes the accelerator off the screen and does all the work for you. This felt really awkward. While playing the game you will probably NEVER have to take your thumb off the accelerator, having the computer control it just does not feel right. Steering assist is something else I didn’t feel I needed. You will have way more fun turning in and out of corners where you think you should, so just keep these off. 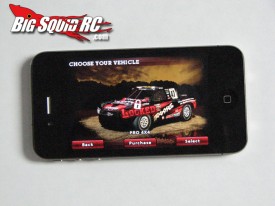 In arcade and Season modes, it’s you vs 5 other vehicles. In arcade mode, you pick a track, pick and vehicle, set laps and go race. In season mode you start off in Amateur, then move up to Semi Pro, and Pro. Each is locked till you have finished the previous. Playing in season sort of goes like this.. Start a race, spend 30 seconds to a minute working your way past the other vehicles, and then spend the last 2-3 minutes just driving an empty track. The first 6 out of 8 races go that way. Then race 7, it feels like every other car got an acceleration upgrade but you. Race 8 it was pretty difficult to catch anyone. What happen to the curve? It’s one thing to get more challenging after I have learned the controls, but why did I kick butt for 6 races, and then hit a brick wall for the last two races? Speaking of upgrades, you are never really sure if you have any. The only place that shows some sort of upgrades are when you start a season, and you are choosing a vehicle, after you choose Buggy, or Pro 2WD you are allowed to choose from several different ones. (You won’t know this, or know that it’s even an option because nothing says you can. No arrows, nothing). Anyway, on that screen, if you scroll back and forth, and you have been racing with a vehicle already, it will show a couple of upgrades as bar graphs. Now if you want to pick a different textured vehicle your upgrades are lost, and you will be WAY slower than the computer. So pick a car and stick with it the whole time. 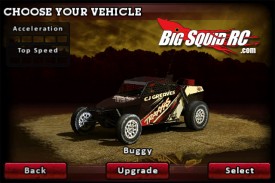 What track you race on seems to be randomly selected in pairs of two. So if you have 8 races, you will have two of one track, then two of another track. This gets kinda old quick. To make it worse, sometimes you have to race the same track 4 times out of 8 races! Looking at my Semi Pro season I have Bark River, Bark River, Chicago, Chicago, Charlotte, Charlotte, then Bark River, and Bark River. Argh.. I was sick of that track 10 minutes ago, I have to race it two more times? Before you start a season, check what tracks you have to run. You can always hit back, and do a reset. You will loose everything, but if you just started, you may get lucky with a better random track choice for your season.

Steering feels pretty good for the most part. They make it pretty easy to get around corners and other vehicles. Once in a while you really feel like you are in the thick of things and you need to muscle your way around. Rubb’n is Racing! For some reason, even with all the ‘helping options’ off, your vehicle still slows down around corners and tight turns. I would of liked it much better if I didn’t just leave my thumb on the throttle ALL THE TIME and actually had to let off now and then, or *gasp* use the brake. My gut tells me this was the decision of someone higher up on the food chain. Some exec somewhere down the line kept crashing or loosing because he didn’t ‘get it’ and they had to make it easier and easier till he could do well. This is probably ok for most people. Most kids and adults will be fine with the way it works, and have a good time racing. Us ‘gamer types’ would like to see the option C, and give us a challenge with throttle control.

The physics are not too bad. I have never gotten my truck to roll over, or have a ‘serious’ crash, but I have seen the underside of several computer trucks. 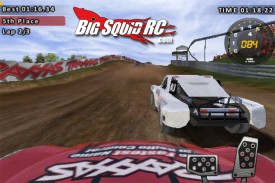 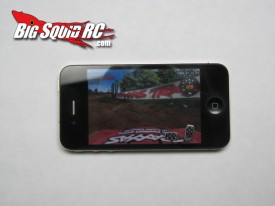 Graphics: The game looks pretty good. There are a lot of amazing looking racing games in the iOS world, and while this isn’t on the top of the list, it’s high enough. The vehicles look decent, the tracks are well done, and the textures over all are pretty good. The starting ‘Traxxas’ texture above the start lights bugs the heck out of me. It’s basically a texture shimmer, and can happen when you have a really thin line in the art. It should of been a easy fix, and it’s one of those things the artists will blame on the programmers and vice versa. The throttle and brake pedals don’t animate, and while they don’t need to, it would of been a nice touch. (*I know they did in my games. 😉 ) 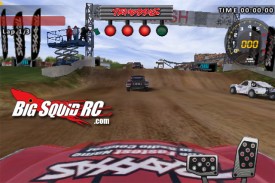 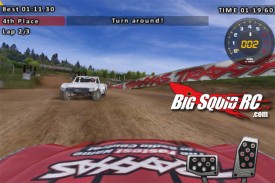 Interface: The overall interface is very similar to many other racing games out there. Sadly there is a LOT to be desired. The fact that I don’t ‘choose’ my upgrades, they just happen. The fact that I don’t know what is upgraded and what’s not. Stuff like no indicators that you can choose other vehicles really irks me. Achievements just sort of happen. I guess you earn them, but not because you were trying to. Eventually you are going to drive over an hour, or over 125 virtual miles. It’s a nice thought, but there are not too many that you feel like you have to do something special to get them. 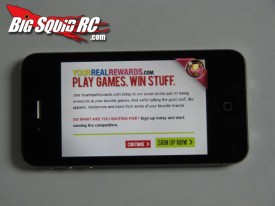 After Racing a couple of seasons, I figured out that I had to sign up to the YourRealRewards.com stuff to win prizes. Doing so makes you start over, from scratch. All the stuff you did before does not go towards this profile. To make things worse, once I signed up the game started crashing. It seemed like it was happening every other time I started the game, it would lock up on boot. Then after a full new season it just stopped loading completely! After trying dozens of times including resetting my phone, I gave up and had to re-install the game. This caused ALL of my stats to be lost again. I decided to NOT sign up for the rewards, and the game has been more solid since. 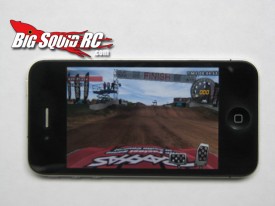 Overall: The game plays pretty good. For a die hard gamer, I would of liked to have seen some more options for giving me more control over my truck and how I race it, but for your average racing game fan, it’s a good game.

I hate the upgrade system. Racing games for years have been giving you money or points to ‘spend’ on upgrades of your choosing. Not in this one. These just happen, and you don’t have a easy way to see what you have or what you earned. The interface is rough. I know it’s a thankless job.. and the guy pushing the polygon count gets all the chicks, but the interface is really an important part of a good game. It’s always the ‘last’ thing to get squished in before the ship date. With any luck there will be a interface overhaul in a future release.
It’s a little buggy. Loosing my season because the game couldn’t load sucked. Getting phone calls causes issues. For instance I’m looking at the text scroll at the top right now and it’s a bunch of script/html looking code. One time I was playing when Cubby called. The game took the phone call, and when I got back, my race was over, and it said I had beaten the competition by over 1 full minute! Basically it just put me at the end mid race.
Lastly, the game cost $0.99 cents. Then to unlock Pro-Light, or Pro 4×4 I have to purchase those for an additional $0.99! I can also buy tires and engine upgrades. If your going to charge for stuff in the game, the game should of been free to download. I don’t want to have to pay for more stuff in a game I bought. 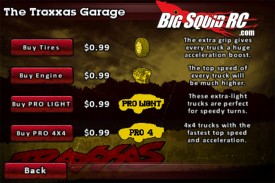 Despite all the issues, it’s still a good game. If your are looking for a racing game to take with you on the go, it’s a decent investment of your $0.99.

*Note: Everyone in the office thought I should be the guy to review this game due to my video game background. I have shipped 20+ games in recent years, (some selling over a million copies) so while some parts of this review may seem like I’m being picky, it’s only because I have been there, done that, and expect some of the stuff I have done in my own games. I truly appreciate all the hard work it takes to create a game like this. It’s not easy.

Changing up the ratings to be more game friendly.

Car Show Rating – 8.0/10 – The graphics look pretty good. Better than a lot of other racing games out there

Interface/Menus – 5.0/10 – I have a lot of issues with the interface and menu system. Nothing that couldn’t be fixed in a update, but there is some work that needs to be done

Big Squid Rating – 7.5/10 – Tentacles.. If your a fan of short course, and looking for some arcade style racing, this is a good choice.