Traxxas Slash on the Cartoon Network!

Ok, the world has gone RC crazy in just a matter of days! A few nights ago I mentioned the Associated Truck on Pawn Stars, well today we find the Traxxas Slash on Cartoon Networks Destroy Build Destroy with Andrew W.K.! My head hurts! The episode is called Big Bros vs Little Bros if you want to check it out.
So the idea behind the show, Destroy something, then build something else, and the looser gets their creation destroyed again. About half way through the show there is a challenge, and the looser gets some sort of penalty. The challenge today? Drive two Traxxas Slash’s through an obstacle course! What makes it even more crazy, it was like watching the obstacle course at our Bash-A-Palooza events!
They never mention Traxxas or Slash, and the vehicles are painted it some crazy camouflage color with guns on the top, but the controllers give it away. 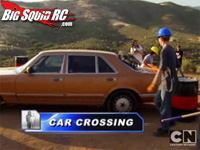 Again we are excited to see RC making it into the main stream in other ways besides the awesome push from Traxxas the the Torc Racing. Keep up the great promotion TV land!