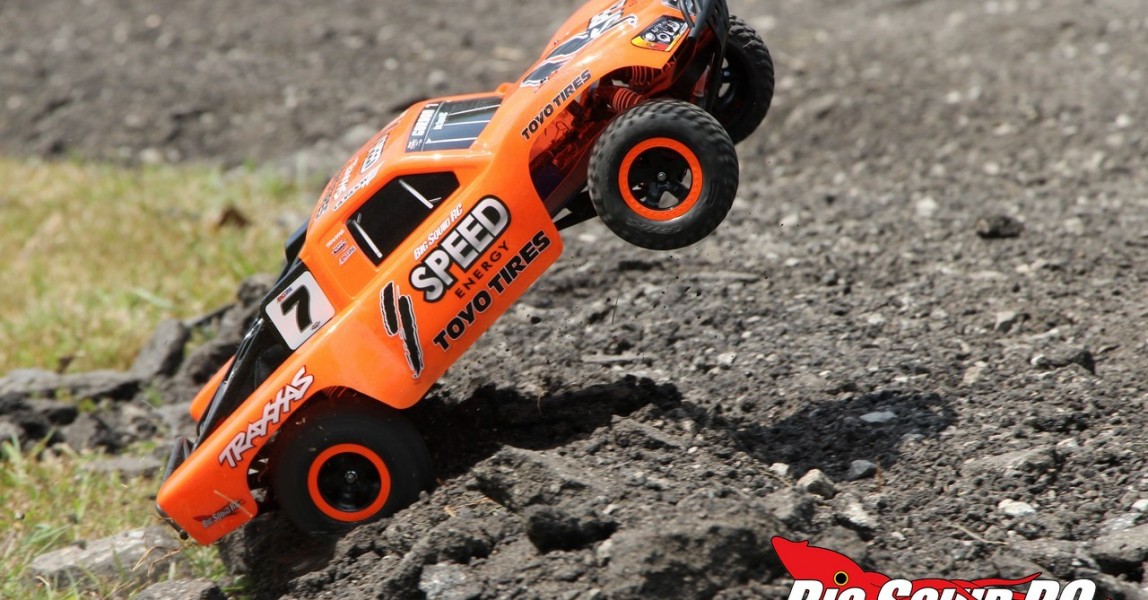 We all know that electronic stability control is changing the hobby, making nearly undrivable cars easy to wheel. For the last couple of months we’ve been testing the latest 2WD Slash VXL from Traxxas, a model that comes with TSM, otherwise known as Traxxas Stability Management. Is the latest version of the Slash a winner for the basher crowd? How does TSM stack up to Horizon’s AVC? Finally, should you cut the check or look elsewhere? Read on to find out…

What’s Needed To Complete: Our unit needed nothing, even the transmitter AA batteries were pre-installed.

Build Quality: We found nothing binding, leaking, or out of place on our Slash.

Test Drivers: A whole bunch of drivers helped out on this review- Legendary Don, Hawaiian Chris, Tim Mohr, The RC Kid, Sam The Noob, Robbie The Gansta, Iron Mikeee, and yours truly.

Set-up Notes: Stock, stock and more stock. We didn’t change anything, not even the stock NiMH or battery connector. We did however skip the included battery charger in favor of a Traxxas iD Easy Peak Dual.

Turning: Ok, most of you have driven a Slash and this unit felt very little different from previous versions. The damping on the shocks and progressive springs are well set for rough/loose/loamy off-road conditions. Because of how soft the suspension is, the Slash easily plants the front tires at corner entry, they stay planted at apex, and because the front suspension has so much down travel, they stay on the ground when tagging the gas at corner exit. The Slash turns quite well on loose surfaces, although the rear can get a bit squirrely at times. On hard packed dirt (or pavement) the soft settings result in a lot of chassis lean, with the front biting, then diving, then rolling.

Jumping: There is no doubt that the Slash was a lot of fun to jump. With loads of power and plenty of suspension travel, we had a blast getting airtime with it. However, it doesn’t have the latest and greatest in suspension geometry, and its shocks are set relatively soft. This resulted in blowing through the suspension travel on larger landings, and not being able to land at much of a sideways angle without flipping over. Also, just like pretty much any 2wd SCT, it was hard to keep the truck level on windy days. Parachute effect is hard to get rid of on a 2wd SCT and our review Slash had plenty of it.

Bumps/Whoops: The Slash still excels blasting over rough ground. Traxxas did a good job setting up the shocks for hitting dirt clods and good sized bumps at speed.

On-Road: The big power was loads of fun on-road, but the Slash’s soft off-road settings resulted in a lot of traction rolling. Yes, you can have fun with the Slash on-road, but you’ll have even more fun if you stiffen up the suspension and lower its ride height a bit.

Grass: The Slash got around on shorter grass without a problem. Its tires and high wattage brushless system let the truck chew right on through moderately tall grass.

Tires: We were fans of the scale type tread design, which remains the same as the original Slash. The tires don’t really excel anywhere, but are good all around bashing tires that proved to last a very long time.

Power: The Slash VXL certainly isn’t lacking for power, even on the stock 7 cell NiMH pack. It has good yank right off the bottom, it rushes through the mid-range, and tops out at over 30 mph on NiMH. The Velineon will definitely give a noob a good taste of what brushless power is all about, and we never felt at a lack for power. We also did a few runs on a 3S Traxxas LiPo which took the power from authoritative to straight up gnarly. On 3S the truck could easily pull wheelies and put some serious stretching on the rear tires. We found the motor temps to be right in the ballpark on NiMH (around 140 at a 85 degree ambient) but the system did have a slight amount of cogging from a dead stop.

Radio: The TSM Slash comes with Traxxas’s TQi, a huge improvement in ergonomics over the original TQ. While hard plastic, the grip had a decent feel and the relationship between the trigger/grip/wheel felt in the ballpark for nearly all of our testers.

Broken Parts: Hooray for Traxxas putting aluminum caps on the shocks! Unfortunately, we ended up ripping off a shock bottom (the part that screws onto the shaft) rather early in testing when landing crooked off a jump. This resulted in a lost spring, lost spring retainer, and popping one of the driveshafts off the outdrive. A bit later in testing we tapped a curb and snapped one of the front knuckles. Also, it wouldn’t truly be a Slash unless we stripped a spur, which we did while running on 3S. However, while we did break a couple of parts, the Slash is well known for its durability, and our test unit did endure tons of abuse with very few broken parts to show for it.

Lets get down to the big question here- how does the Traxxas TSM stack up against Horizon’s AVC? The answer is both better and worse. Compared to a typical RTR Horizon AVC vehicle with a DX2E base transmitter, the TSM works better. How is that? Because the Traxxas TSM system does a decent job of keeping the Slash from spinning out (and keeping it straight through bumps and under heavy breaking), without reducing the truck’s tight turning ability. However, our TSM test unit wasn’t without its downsides. Compared to a VXL 2wd Slash that we installed AVC with a Spektrum DX4S controller (found Right Here), the TSM did not have the overall level of vehicle correction that our AVC equipped truck had. In crazy bumpy or ultra slick sections, the AVC version simply kept the truck more under control. Lastly, we found that TSM can be turned too high, a problem we’ve never encountered with AVC. What we mean by that is, we found that if we set TSM to 100% on the controller, that the truck ended up fighting against itself. Whether it was a field of lumpy dirt clods, or on high bite asphalt, a 100% setting on the TSM was too sensitive, with every little bump and jolt causing the system to make a correction, sometimes causing the truck to swap back and forth where it would have remained relatively straight with the TSM turned completely off. We found that about 75% was the max we could run TSM without it being too sensitive.

Just one more note on the TSM. We noticed this- lets say the truck was sitting at a dead stop. Lets say we barely hit the throttle, in fact so little that the truck would just bump a couple of inches forward, but no more. We found by doing that the front wheels would slowly turn to the left, then back to center by themselves with no input from the steering wheel. Weird.

On a different note, the Slash comes with a good old 48 pitch spur gear. While we only roasted one spur, we would really like to see Traxxas go all King Kong and put 32 pitch on the truck to fix burnt spurs once and for all.

The battery and charger come with the new Traxxas iD plugs. These work great with the latest gen of Traxxas chargers.

Remember that brace on the bottom of the rear bumper (that slides over the side of the rear of the chassis) that always popped out on the original Slash? Yup, same story on the latest version.

Our test unit came with the old school high center of gravity chassis, which we prefer for general bashing. It helps the truck get over large dirt clods and tall grass better. If most of your driving is on high bite surfaces, you’ll want to investigate in switching over to the LCG design.

Best Mod Under: Go for big power baby, cut the check on a 3S LiPo and let the insane times begin.

Time To Bash: B Everything comes in the box, including a 4 amp DC charger.

Workability: B While some of the camber rod bolts can be hard to get to, generally the Slash is a breeze to wrench on.

Car Show Rating: B The actual shape of the body wasn’t that exciting, but its flo-orange paint and true to life Robbie Gordon livery turned heads at a local bash that we attended.

Bash-A-Bility: B We did manage to break a few parts, but overall the Slash was quite durable despite the abuse that we put it through.

Fun Factor: B What’s not to like about big brushless power and stability control to actually put it to the ground? A “normal” brushed Slash is fun, BL with TSM much more so.

Handling: C While its loamy/low bite handling is top notch, the set-up used to get there makes the truck suffer on grass, asphalt, and blue groove.

Value: C The TSM Slash isn’t the cheapest or most expensive truck in its class.

Parts Availability: A See, an A is actually possible in this category. Parts availability is really important to a basher and Traxxas has the best in the business.

BigSquid Rating: B We had lots of good times with the TSM equipped Slash. It had plenty of roost spewing power and the electronic stability control worked well on putting it to the ground.