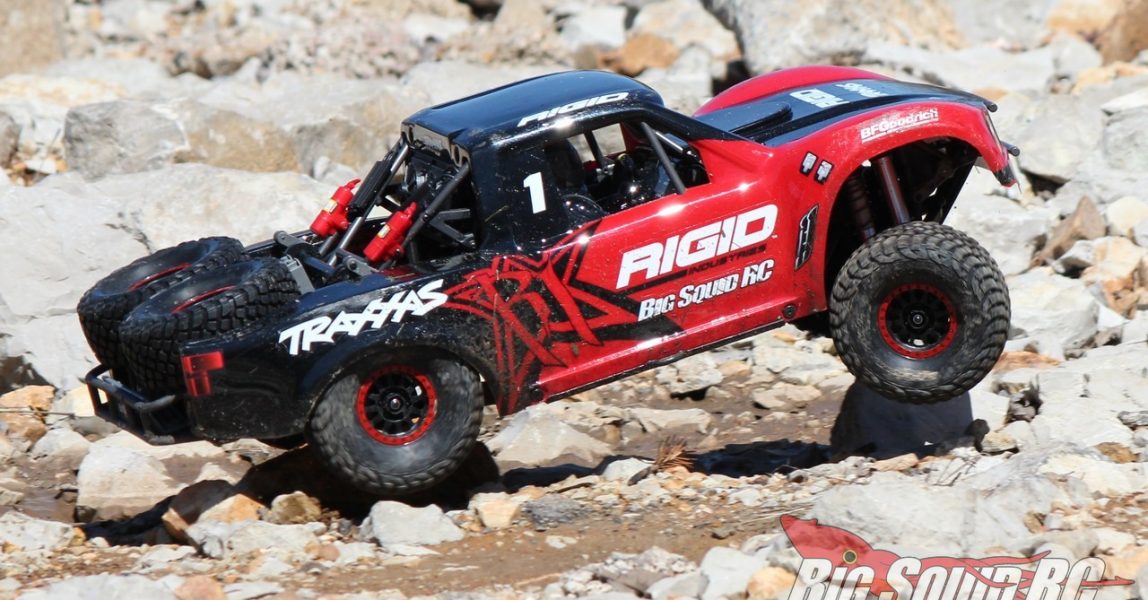 Over the last half decade we’ve seen scale realism go from taking a backseat to performance, to becoming the number 1 thing that consumers demand. Initially it started in the rock crawling scene, now it is everywhere. A great example of this is the new Traxxas Unlimited Desert Racer. The Traxxas UDR was designed for incredible scale looks on the outside, plus all of its suspension settings were made to give the truck a realistic look, and feel, while driving. Is the Traxxas Unlimited Desert Racer the ultimate scale off-road truck? How fast is it? Is scale driving fun? Read on to find out…

Primary Competition: While there are a number of desert style trucks on the market, the Losi Super Baja Rey is the biggest competition for the UDR.

What’s Needed To Complete: Not much. You’ll need to pick up 4 to 6S worth of LiPo power, four AA batteries for the transmitter, and a battery charger.

Build Quality: We did not find any issues with the build quality on our test unit. We passed the truck around the room, but none of our Bash Crew guys could find any assembly issues.

Test Venues: We used two local city parks to put the UDR through the wringer. Minnie Ha Ha and Arnold City park were great places to stretch the legs on the UDR.

Set-up Notes: Stock, stock, and more stock, we didn’t even alter ride-height. For batteries, we drove the UDR on both 4S and 6S. Traxxas iD 2S 7600 and 3S 5000 packs did a great job of fitting properly and putting out plenty of power. Charging was handled by a pair of Traxxas EZ-Peak live chargers, while Interstate handled the AA duties inside the TQi.

Driving: This is going to be the easiest to explain “driving” section ever. Why? Because the UDR drives just like those big trucks racing for real on MavTV. No, it doesn’t handle perfectly, it handles scale. For it to handle in a scale manner, the suspension had to be fairly soft, and it had to have TONS of wheel travel. Traxxas hit both requirements right on the mark.

The UDR drives arguably more scale realistically than any truck ever released on the market. Seriously, it looks scale at speed, and “feels” scale appropriate as well. When you drive the UDR you can tell it has some sway to it, and you can tell the rear loves to slide around. Those attributes aren’t good for rc handling, but they are a requirement if you are going for a scale feel (and appearance) while driving.

In corners, honestly we expected for it to traction roll more. The UDR uses a very scale suspension/sway-bar set-up to actually drive fairly well, despite its scale tuning. It will traction roll in corners when you catch an edge or find too much mechanical grip, but most corners can be attacked just like you see on TV. Go in hard, pound the brake, and mash the gas at the apex.

By the way, while not the fastest truck in the sand lot, we had an all new type of fun while driving it. How is that? Well, you can keep driving a normal rc truck until you find its edge. By that we mean, that “point” when your truck just can’t go a speed without crashing. With the UDR, finding that edge is a LOT more fun. The “edge” of sorts on the UDR is much wider than a normal rc truck, plus, it is just so much fun watching it get ohhhhhh soooo close to crashing before saving it.

To boil it down- the UDR is far from the best handling truck on the market, but just might be the most scale realistic ever.

Power: Ya, so about that big brushless system. We found that driving the UDR on 4S was optimal. Why? Because it looked the most realistic that way, and its suspension was getting pushed pretty hard on 4S power/speeds. Yes, when we popped in 6S the truck felt ballistic, but it quickly overpowered its suspension resulting in more crashes. OK, to be honest, when we popped in 6S, it felt like the truck went from a “normal” scale speed, to basically bolting 5,000 horsepower into Jenkin’s personal 4wd race truck. 6S seemed to “feel” faster than normal thanks to the scale tuned suspension, needless to say it was a thrill.

With most of our driving on 4S, we found the power system had nice yank right off the bottom, had a brief but powerful mid-range, then the top end pulled like crazy until it ran out of gearing. There was no “bogging” from the power system, the moment you pull the trigger to a certain percent of throttle, the wheels on the truck are going that same speed, regardless of incline, type of surface, etc.

Will you ever want to bolt in more power? That’s a big no. The stock power system is more than plenty on 6S, and about perfect on 4.

What about the stock gearing? On a 5 minute run, with an ambient temp of 47 degrees, on 4S LiPo, the motor on our test unit shot at 132 degrees F. We would recommend checking motor temps in warmer ambient temps, on longer runs, and whenever running on 6S.

Radio: The included TQi did its job without error during our test period. It had tons of range, it never glitched, and just simply did its job. Being a TQi unit, you can easily upgrade it for telemetry on the Traxxas Link App. For ergonomics, we liked the foam covered wheel, but about half our testers thought the grip was slightly too thick.

Broken Parts: Go big or go home right? Well, the UDR isn’t designed to be a tank like the E-Revo 2, it is designed for maximum scale realism. With that said, the truck had numerous bad landings, various cub taps at speed etc, without much breakage. Robbie G tagged a short steel rod at speed (6S WFO) and broke a lower arm. Later in testing, the rear end started to make some noises, but to this day it still lives. No, we didn’t go epic with the UDR, it proved itself durable at “normal” driving levels, but did break some parts when we started abusing it.

In an age when some companies put little to no effort into their manuals, we were stoked to see an incredibly cool manual, and start up manual, for the UDR. Why do we mention this? Well, every truck needs a good manual, plus, the guy that wrote that stuff probably rarely gets a pat on the back.

Yup, that is a real spare driveshaft stowed away on the back of the truck, nice touch! But then, we could post that about a couple dozen different small details from all over the truck.

Torque twist? Nope, we never noticed any while driving the UDR.

Unless the ramp you hit has a very low arch, the UDR tends to jump nose low. Pretty much all the solid rear axle/IFS rigs do that. Some jumps are no problem, but on ramps that would really boot some airtime, we typically approached the ramp face at 1/3 throttle, then went to WFO up the ramp face. This was pretty dialed for 4S driving. Jumping on 6S, the added RPM allowed for more aggressive ramp face speeds as it was much easier to flatten out the truck with the additional power/RPM.

While not scale, it was crazy fun popping on demand wheelies with the UDR while on 6S!!!

The stock tires are hard, and quite flat on top. Both of those attributes really help keep the truck from traction rolling excessively. Oh, and they wear a long time too.

We really liked using the TSM stability control along with the UDR. On some trucks it is no big deal, but on the UDR it can make a night or day difference. Once we had it set perfectly, we were really hauling with the truck around corners. In fact, if ROAR doesn’t instantly make a class for this style of truck, they seriously have a screw loose. Seriously, watching a bunch of these trucks racing is actually fun to see!

When you push the UDR with your hand, you notice it has more drag than most trucks. This is because of the uber gear reduction rear axle, you can feel more drag when pushing it. However, we never noticed the extra drag while driving.

There are scale details everywhere on the UDR, like everywhere! Seriously, the UDR is instantly one of the best looking trucks of all time, and it does it in a perfectly scale manner.

Best Mod: Oh so easy on this one, hit up Hitec for an uber servo. The stocker doesn’t have bad torque, but a high-end unit will have more, and be much faster.

Time To Bash: B No, it didn’t take long for us to get the UDR up and running. By the way, the scale style battery tray worked just fine for us, even after hard bashing.

Workability: C Ummmmm ya, we love scale appearance, but when you start getting super scale looking, compromises have to be made. One of those is the ease of working on the truck. No, the UDR isn’t hard to work on, but it is harder than a “normal” style of rc truck.

Car Show Rating: A+ Yes, the UDR just might be the best looking vehicle ever released into the rc world.

Bash-A-Bility: B We found that if you drive the UDR at relatively normal speeds that it holds up well, but when you start pushing it hard it can break some parts.

Fun Factor: B This one depends a lot on YOU. Yes, you. If you are looking for the most scale realistic driving experience possible, the UDR is the ultimate truck for you. If you are looking for state-of-the-art rc driving, Traxxas has a whole bunch of other trucks for you. However, we found it really fun. It was something really new, nothing drives as scale as it does, and we really enjoyed that.

Handling: B Pretty much what we just said also applies here. The UDR might be your ultimate truck, or you might not like how quickly the suspension gets over powered.

Value: A Great truck. The looks, the scale driving experience, the fact you can sit it on your mantel and just stare at it all day without tiring. Yes, it’s worth every penny to a hardcore off-road hobbyist.

Parts Availability: N/A The UDR hasn’t been on the market long enough for us to get a good read on parts support yet. However, it is a Traxxas, and they are well known for hobby shop owners stocking a lot of their parts.

BigSquid Rating: B+ Yes folks, the Traxxas Unlimited Desert Racer is a great truck. And maybe even better than that, it is just really cool. It is cool to look at, it is cool to hold in your hands, it is cool to drive with. Heck, it is even cool to watch being driven by another person! If you are into the 4wd off-road scene, the UDR absolutely belongs in your rc garage.