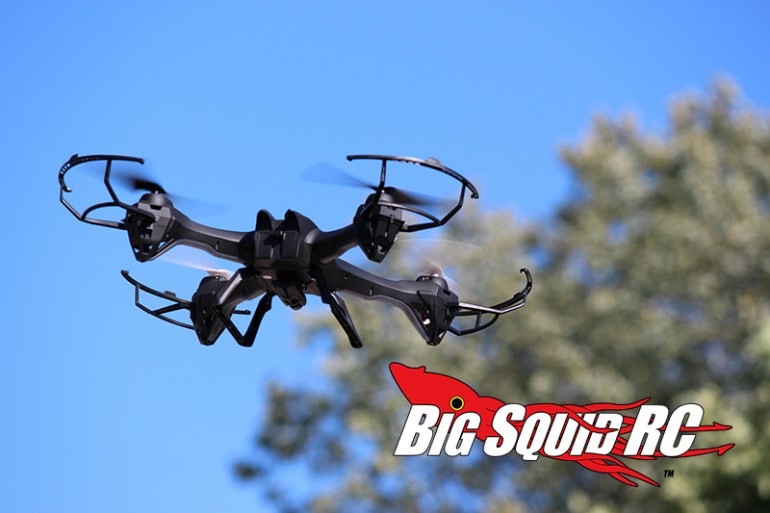 As quadcopters slowly takeover the world, the next big thing is flying FPV. We recently received the UDI Lark FPV Quadcopter to check out, and of course it was up to use to see if it could take the abuse of a basher. Did it hold up? Is it a decent quadcopter? Keep reading as we go in depth for our review.

Review By: Brian
Photography By: Tiffany S. and Brian

Competition: There are a lot of quadcopter’s on the market right now that offer FPV, but the size and price make this one pretty unique.

Needed to Complete: Nothing. Everything you need comes in the box, batteries and all.

Setup Notes: There isn’t a lot needed to get the LARK FPV up and flying, but we want to mention a couple of things. Both the battery for the quadcopter and the battery for the transmitter use two different USB port chargers. This is convenient for a lot of people, as there are so many ‘newbies’ coming into rc just for the quads, most of them are not going to already own chargers. There are two things we didn’t like about the charging. First, to fully charge the quadcopter battery takes about Two hours through the USB port. The lipo is actually two 1s packs wired in parallel giving you 1000mah. Two hours is a long time to wait between flights. Now most experienced hobbyists would want to charge them on an existing charger, but the connector on this battery is pretty non-standard, so there is going to be some new plugs and wiring if you want to do it quicker.

The second thing we didn’t really like is that while charging the quad battery, the USB light on the charger will be OFF. It will come ON when the battery is full. The USB light on the charger for the transmitter battery will be ON while charging and OFF when it’s fully charged. So they are exactly the opposite of each other, making you have to stop and think every time you glance over to see if they are done charging. While this isn’t the end of the world, it is something that seems like it could of been easily done for both to work the same.

Pairing the quadcopter to the transmitter went very smooth, and once the batteries were charged we were flying in no time. The manual (Yes there was a actual physical manual, we didn’t have to download online) is very well written. Step by step instructions were very good to get up and running, as well as using all the features.

Flying: The UDI Lark is actually pretty large at 19 inches across. It’s also surprisingly light. While the motors are tiny, it’s very agile in the air because there isn’t a lot of mass to move around. The ‘auto flip’ feature works well, and always has on-lookers surprised putting smiles on their face as well as ours.

There are three different flight modes from beginner to advanced. The beginner mode keeps the quadcopter nice and stable using the gyro’s to make it easy to fly. The intermediate mode lets you get some good speed going with the quad, as well as stronger banks and turns. The advanced mode really has the quadcopter moving!

We flew the Lark FPV in all sorts of wind. Even with strong gusts, we had no problem keeping the Lark under control and air born.

Flying FPV works well. The screen itself was nice and bright, and there wasn’t much lag between the quadcopter and the screen. It did take a little getting used too, as there is some lag, and while we were getting a little crazy trying to do some tree and obstacle dodging, we did hit a number of things we felt we were going to get around.

Average flight time was 9 minutes. While this might seem short, the video transmission takes a good amount of battery life, and if you are flying FPV it can be a little intense, so 9 minutes of panic and dodging may be enough.

Transmitter: The transmitter is an interesting beast. It actually feels pretty good in your hands, it’s also very light weight. All the buttons are easily accessible, and the screen provides a good amount of data.

Durability: Not having a lot of FPV flying experience, we crashing this thing a lot and it’s survived! We are talking several full speed tree hits, slamming into the sides of sheds, and other immovable objects. Not only is it still flying, we haven’t even broken a prop! That being said, one of our harder hits did destroy the included memory card. This was actually a little sad because we couldn’t recover the video, and it was a great run and an awesome smash that we are sure would of looked good in video! The prop guards help a lot, but in general the UDI Lark has been a beast that keeps on ticking.

Time To Bash: C While everything you need is in the box, it takes a long time to charge that quadcopter battery via USB.

Workability: B There isn’t a lot too the Lark, and replacing the motors and propellers is pretty easy.

Car Show Rating: C It’s large which is impressive, but the plain black with small led lights isn’t much of a show.

Bash-A-Bility: A We have crashed and smashed the Lark a dozen times without even breaking a prop. Great news for new pilots!

Fun Factor: B It’s a good quadcopter even without the FPV, but add in the fact that I can get a first person view of the action, and you will be having loads of fun.

Handling: B It handles pretty high wind without too much trouble. It’s very agile for it’s size.

Value: B $199 is a pretty good price for a quadcopter this size, this durable, and has FPV built in!

Parts Availability: C You aren’t going to find parts on the pegs of your local hobby shop, but HRP should have plenty in stock on-line.

BigSquid Rating: B- If you are thinking about getting into the FPV world, the UDI Lark from HRP isn’t a bad place to start. While you aren’t going to be shooting amazingly beautiful scenes from the on-board camera, you will be enjoying some great first person action with the comfort of knowing if you do slam into something, it’s probably going to survive the crash. Some pictures below are shots we captured from the camera. It does stills as well as video.