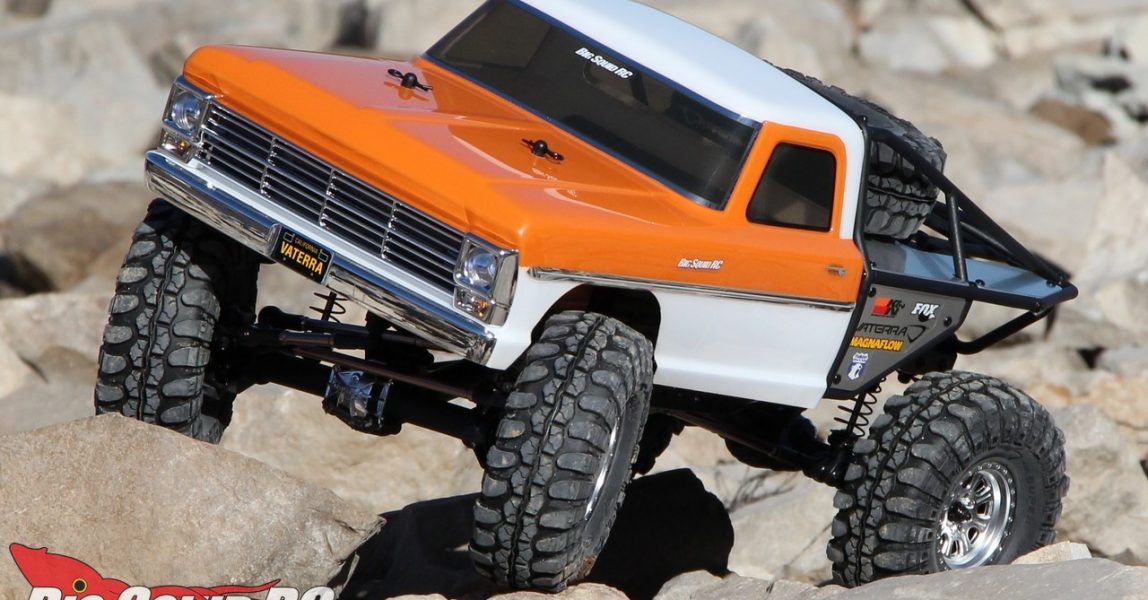 The newest truck to be released in Horizon Hobby’s Vaterra line is a 1968 Ford F-100 Ascender. With bold scale looks sitting on the ultra-capable Ascender platform, the F-100 should make for a great trail rig. How well does it hold up under hard bashing? Is it easy to set-up as a bind and drive? How well can it rock crawl? You know the drill folks, keep read’n to find out what we thought about the Vaterra Ford F-100…

Review By: Cubby, aka CuDDy, aka Chubby, aka Kuhbee
Pictures By: T-Mohr

Front wheel travel (vertical only): 1.2″
Rear wheel travel (vertical only): 1.4″
Wheelie on demand: Yes, if you go full reverse to full forward
Backflip off ramps: No
Stability Control: No
Sound Module: No
Self-Righting: No
FPV: No
Top Speed (measured by BSRC): We did not attempt to measure, but pretty standard for a crawler, around 8 mph or so.
Runtime (measured by BSRC): No, we didn’t measure this either. Ya, it runs a Reallyyy long time.
Street Price: $319

Primary Competition: Oh ya, the Vaterra faces all sorts of stiff competition. To see its competitors you can look at our recent scale shootout, or you can know it goes up against trucks like the Traxxas TRX-4, the Redcat Everest Gen7, several RTRs from RC4WD, etc.

What’s Needed To Complete: The Vaterra comes completely pre-built and comes as a bind and drive with a Spektrum receiver. To get up and running you’ll need a shorty style LiPo for the truck, a battery charger, and a Spektrum radio.

Build Quality: Once we pulled the Vaterra out of the box we handed it around the room for the crew to inspect. We simply could not find any issues with its assembly, very nice.

Test Drivers: We used a crew of Iron Mikeee, Tim Brown from the STL RC Freaks, Robbie G., T-$$$, and yours truly.

Test Venues: We used 3 local city parks to do all our testing in. All three parks were located close to a river so we had plenty of rocks, sand, water, mud, and dirt to test on.

Set-up Notes: As per our norm, we ran the Vaterra bone stock. For power we decided to use a Dynamite Reaction 2S 4000 shorty LiPo pack. Charging of the shorty was taken care of by a Dynamite Passport Ultra Force Duo. To control the beast we used the one and only Spektrum DX6R. Ya, the 6R may have been overkill, but it worked extremely well with the Vaterra.

Turning: The Vaterra does two types of turning. In difficult rock sections its servo and steering geometry work well to get the truck up and over just about anything. On higher bite surfaces like pavement or hard packed dirt, its fully locked front and rear diffs make the truck difficult to turn. The good news is if you keep the truck in its intended realm, meaning loose conditions, we thought the Vaterra was right up there with the best in its class for turning. While the stock servo does not have the uber torque needed for hardcore crawling, we found it did a steady job for us more casual rock crawlers.

Jumping: Yes, we jumped the Vaterra, it is an off-road truck that is bound to catch air once in a while. And no, airtime is not its thing. Of course that is pretty much the case for any rock crawler, but ya, getting a few inches of airtime is cool with the Vaterra, going any bigger does not typically lead to a good result.

Bumps/Whoops: In its normal environment, something like low speed gnarly sections, we found the Vaterra to do an admirable job for a rock crawler over bumps. Going over bumps at moderate speeds, the truck did what it was supposed to, it kept its tires glued to the ground with minimal bouncing. Kicking the speed up to full throttle and the truck did start to bounce around a bit, but overall, the Vaterra proved to handle bumps as well, or better, than anything else in its class.

On-Road: If you buy the F-100 to drive around on pavement you have a screw loose, it was simply never designed to perform well on that type of surface. However, we all have to cross pavement once in a while to get to our favorite trail. We found while doing short stints of pavement driving that it drove much like a normal crawler with locked diffs. It had a hard time turning and its low top speed just didn’t give us much thrill. However, we did find that you can easily pop wheelies with the truck by going full reverse to full forward while on pavement (you can do nose wheelies too by going full forward to reverse!). Hard on gears, but a LOT of fun.

Grass: Our test truck did a fine job of chewing its way through grass. The tires on the F-100 were well suited to the task, as was its 4wd system with locked differentials. The Vaterra basically ignored grass that was shorter than the top of its hood.

Tires: Has the rubber compound gotten softer on the latest Vaterra? We didn’t get a chance to feel the tires side-by-side with one of its predecessors, but we swear these are softer than the Vaterra Chevy in our scale crawler shootout. Any which way, the tread pattern was an excellent reproduction of the full sized tire, the foams were usable, plus the tires themselves are fairly tall for a 1.9. With all that said, they did a Really good job on rocks and out on the trail. The already incredibly capable Ascender chassis seemed to be a really good match for the tires. In fact, we were getting over sections that even fully modified scale crawlers were having trouble getting over, another testament to the stock kicks. To boil it down, the stock tires aren’t comp grade, but worked quite well in various off-road conditions.

Power: The Vaterra comes with a nicely done power system for a crawler. A 35 turn brushed motor doles out plenty of sweet, smooth power. The F-100 packs exactly the style of power you want when crawling through extra gnarly sections- soft and manageable off the bottom with enough raw wattage to get out of a hard bind.

Radio: As a bind and drive, the Ford F-100 does not come with a radio. It is supplied with a Spektrum receiver, thus saving you the cash of paying for another RTR transmitter when many of you already have one (how are we kidding, you have a half dozen) sitting in your garage. We bound our truck to a Spektrum DX6R, which performed flawlessly and was wayyyy cool driving with out on the trail.

Broken Parts: Ummmmm… ya. So we pretty much make sure we break every single car before the review is over. There have been a couple where we simply could not break them, even by going to fairly ridiculous measures. We were not able to break the Vaterra during normal testing, although we did strip the stock servo arm. The Vaterra has a rugged design, plus it doesn’t have a lot of speed, so that certainly helps too. After getting a bit extreme and jumping our test sample off a one story building, it did break a shock end. We were very impressed by the Vaterra’s durability and think you will be too.

Oh ya, that steering servo. The stock unit has 9KG of torque and works fine for a RTR crawler. It isn’t fast, it doesn’t have crazy torque, but it has enough performance for a new user or normal hobbyist.

What exactly does it take to bind the truck to a Spektrum transmitter? You’ll need to remove the lid on the fuel cell/receiver box, that takes four 2.5mm bolts. You then insert a bind plug into the receiver and bind it to your radio. After that you just need to set the steering on your transmitter, plus make sure the speedo has been calibrated to the radio. All this takes about 15 minutes, tops.

Ya know, the biggest downside to the Vaterra just might be its biggest upside. On the downside, the Vaterra uses a “shorty” sized pack. While most racers have a ton of those laying around, most bashers have exactly zero. On the plus side of things, it uses a “shorty” sized battery pack. A shorty has great energy density for an application like the Ford F-100- plenty of voltage, plus plenty of capacity. Then, because of the pack’s size, the Vaterra engineers came up with an uber battery tray that moves with the truck, helping to keep the center of gravity low.

As scale detailing becomes more important, we liked how the rear body mounts were hidden on the Vaterra.

Best Mod: Actually, our first recommended mod for you guys that drive on trails is to add a few teeth to the pinion. A few more mph would sure help out on the trail. Also, another free mod is to loosen up the pre-load rings on the shock springs to soften the suspension. This really helps to give the truck more articulation in the rough, while also improving the truck’s ability to soak up bumps at speed.

Time To Bash: C We found the bind and drive Ascender to be easy to set-up, although it does take more time than a normal RTR.

Workability: B Most crawlers are easy to wrench on, we found the Vaterra easier than most.

Car Show Rating: A It keeps getting harder and harder to get an “A” in the looks department, but the Vaterra certainly earns it.

Bash-A-Bility: A Our test unit held up, pack after pack. After hitting small jumps, tumbling off of many ledges, and binding up the drivetrain countless times in the rocks, our test truck is still as good as it was new (well, for the most part).

Fun Factor: A What makes the Vaterra so fun? How capable it is. Seriously, it is hard to believe that a RTR crawler can do what it can do, or keep up with the modified trucks that it can.

Handling: A The Vaterra is easily one of the best overall handling RTR scale crawlers on the market right now. It pretty much eats all of its competition in the rocks, but it also does a great job when trail driven.

Value: A We are all for saving money by releasing trucks as bind and drives. As a BND, you get a whole lot of bang-for-the-buck with the Vaterra.

Parts Availability: C Most parts for the Ascender platform have been out quite some time. We only found a few between our local hobby shops, but we could easily find them on-line.

BigSquid Rating: A- If you are looking for a nicely detailed rock crawler that can run with the best for pure performance, the Vaterra Ford F-100 Ascender is for you! Our Bash Crew loved the Vaterra’s blend of scale realism and high performance trail capabilities, and yes, we can very highly recommend it to you.