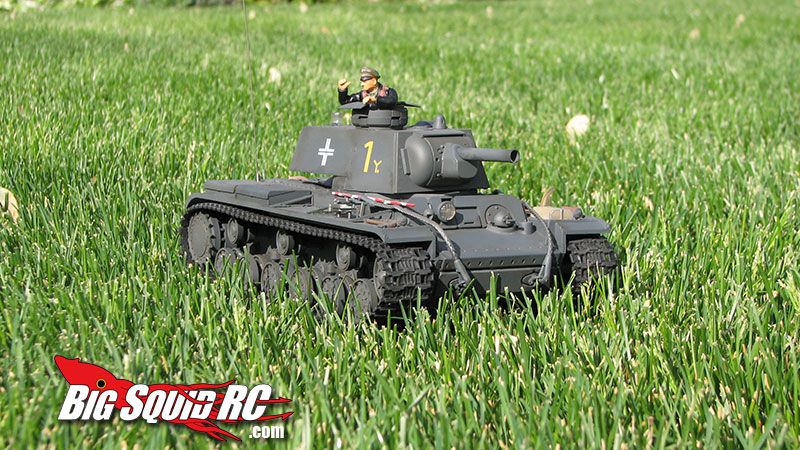 THE VS Tank Pro Review 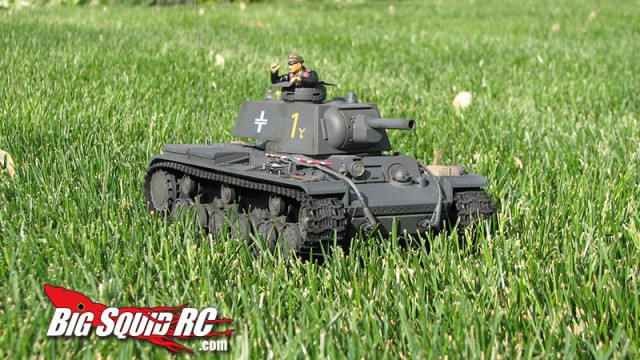 We recently got our hands on two VS Tank Pro vehicles. The M4A3 Sherman (USA) and the Pz.753 (German) seemed like good choices. We opted for the infrared instead of the Airsoft versions because we knew with Cubby around we’d have bb holes in walls and bruised shins. On the official VS Tank website the vehicles look pretty dang cool, so how do they look in person? How do they operate? Keep reading to see our review…

Primary Competition: There are a few other types of rc tanks out there, but VS Tanks are probably the best known and most supported.

What’s In The Box: Each box comes with a tank, the transmitter, and a couple of extra detail pieces like people or ammo boxes for you to attach later.

What’s Needed To Complete Kit: AA batteries for the tanks and transmitters.

Build Quality: The quality out of the box is awesome. We didn’t have any build issues or broken parts. Everything worked perfect.

Set-up Notes: There isn’t much that needs to be done before you are ready for battle. We stuck our guys in the tops of the tanks, installed the receiver antenna, and popped up our IR sensor.

Controls: There is a lot going on with the VS Tanks. You have rotating turrets, adjustable cannon angle, cannon fire, machine gun fire, then there’s steering and movement! As you may imagine it may take a few minutes to get used to what all the buttons do, but it really wasn’t too bad. Everything becomes sort of second nature once you determine what’s important to you. Moving the cannon up and down, not really needed, but driving, rotating the turret and firing the cannon, all important.

Looks: The tanks really look pretty awesome in person. They are extremely detailed, but if you really wanted to dress them up or add some more paint to take it to the next level, you could really blow some people’s socks off. Out of the box though, they look good enough to sit them on a shelf and be admired.

Broken Parts: There are a lot of small and detailed pieces on the tanks, chains, ropes, antenna, etc. We did manage to bust a couple of these off during our rougher than normal use. Nothing broke that we honestly didn’t expect to break. These things are like RC models, and you should treat them as such. That being said, we have banged them, run them into stuff, and handled them how most people wouldn’t, and they are still running and looking good.

Misc Notes:
First there are some really cool features that aren’t mentioned often. The sounds of the motor as it starts up, the cannon and machine gun sounds, the hit sounds are all nice touches. There is a volume control on the bottom of each tank in case you need more or less engine and explosion sounds.

The tanks have lights, and when you FIRE your cannon the whole tank lurches back from the shot. When you hit another tank, there are lights that light up the inside of the tank to show battle damage. This is REALLY a cool effect as you don’t see these areas in normal use, and when not being shot. (See the last pic at the bottom)

We went with the infrared ones for obvious safety reasons (*cough* Cubby) and were surprised that the manual does not really talk about how the infrared stuff works. The infrared tanks allow you to battle. Being a video game guy, I was looking forward to seeing how this was going to work, secretly hoping it would be like playing a 3rd person shooter. Each tank has an amount of damage it can take before it is disabled and rendered useless. This damage amount is about 5 cannon hits. You can also be shot with the machine gun.. it takes a good amount of machine gun damage to produce one cannon hit.

At first it seemed like great fun. We had set up a bunch of box obstacles, and were cruising all over the office, ducking behind bookcases, and trying to attack and shoot through perfect angles. It didn’t take long before we discovered the infrared bounces and reflects off everything, and seemingly shoots through things. We were getting shot around corners, shot from cannons firing 180 degrees in the wrong direction, and behind barriers. So while it was great fun when people ‘played right’, it became frustrating when someone was just shooting as often as possible, not caring if you were in their sights or not, and they would cause damage.

After a tank is rendered useless, you need to pick up your tank, turn it off, and turn it back on again. A reset button on the top of the tank would of been ideal. While we were playing, everyone always wanted to start with the same amount of ‘hit points’ so each tank would need to be ‘reset’ because they would remember how much damage they have, or shots fired.

When we moved outside the ‘reflection’ damage was less, but still present. The infrared seems to have a very wide range, and you could do damage or cause damage when the cannon was not facing the other tank directly.

While not the ideal game, they were still fun to use, and they look/feel really cool driving around. Your average user will be pretty happy, but from a gamer’s point of view, it could be improved.

For those wondering, the top speed is about 1mph. Maybe less, it was hard to measure, but it feels right. Not too fast, not too slow.

The two sticks on the controller we had do not control individual tank treads, but actually forward/backward and turning left/right. This we feel makes it easier to drive for ‘most’ people.

Best Mod Under $5: Have some CA glue handy in case you break off a part. We have been narrowing our cannon output a little to try and bring in the damage area, this can easily be done with some electrical tape.

Best Mod Over $5: If you want to go nuts, dig out the air brush, add some ‘dirt’ and battle field scaring.

Workability – NA/10 – There is not a lot you are going to be working on here. They are meant to be pretty self contained.

Car Show Rating – 9.5/10 – They look great! Everyone that has seen them has to take a closer look and inspect them.

Bash-A-Bility – 7/10 – You aren’t going to be jumping them, or running them in mud or water. Small parts can be broken off.

Fun Factor – 8/10 – Fun and less fun all at the same time. They are fun to drive and shoot, but getting shot around a corner can be frustrating.

Handling – 8/10 – They drive like a tank. Slow and steady. It’s not difficult to get them to go where you want them to. Driving up and over books and boxes can bring a smile to your face.

Big Squid Rating – 8.2/10 – Tentacles..They look great, they are fun to drive, and will turn a lot of heads. If the shooting was more precise, the VS Tanks would be a real blast!