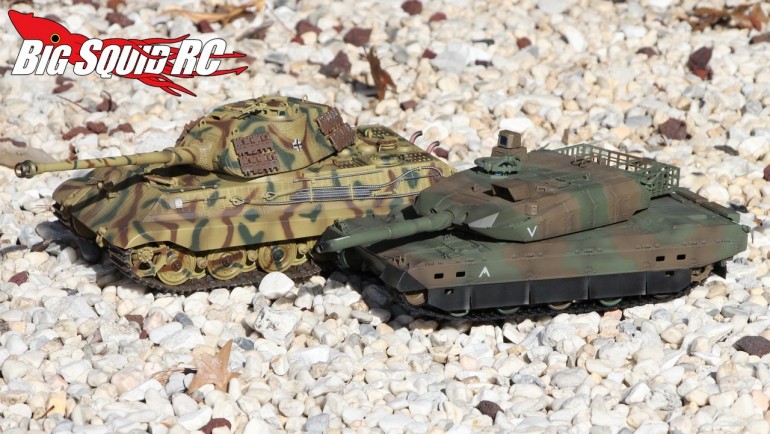 There are many different segments to the rc hobby. Some people love flying planes, others love rock crawlers, while others scratch their rc itch by driving boats. RC Tanks have long been a favorite among rc hobbyists, and while the genre isn’t a large one, it is still quite active and can be a great way to experience something new when you are burnt out on everything else.

We have been beating on a pair of 1/24 VS Tanks for several weeks now. Are they fun for a normal backyard basher? Do they break easily? How fast are they? What is it like to play a game of infrared rc tank war? Read on to find out…

Set-Up Notes- We ran both of the tanks absolutely bone stock. Each required 8 AA batteries for the tank, and 6 for the transmitter. We used Duratrax AA cells, but any brand should work fine.

How Do They Drive? While we had a blast testing the limits of the tanks, they drive a bit more like a toy grade unit than hobby grade. They both seemed to have a slight amount of delay between an input to the transmitter and when the tank would actually move, and they didn’t seem to have to have a lot of different steps in their forward and reverse operation. After testing on several different surfaces, we found out that their somewhat small size and light weight held them back for serious off-roading. The tanks drove best in short grass, pavement, carpet, and in smoother dirt areas. For power, we never were left wanting for more. They are geared super-low for scale realism which helped give them plenty of torque for climbing over objects.

The scale detailing on both tanks is mind blowing. Every single inch of both tanks seems to have been perfectly replicated. Even the tiniest of details has been reproduced on these tanks, you can sit one on your desk and just marvel at how they look.

Both tanks have decent suspension. Not that you’ll be jumping them, but the suspension actually works well for typical driving speeds.

Playing/driving the tanks was a LOT of fun and a nice change from normal surface and air vehicles. Our test units came with infrared canons (they are also available in airsoft), so it was fun to chase the other tank or hide behind objects in a mock war. Pressing certain buttons on the remote resulted in either cannon or gun fire, and when aimed properly at the other tank, would result in a hit.

We experienced really long run times on the AA batteries that we used. So no, you won’t have to be replacing them all the time.

We drove both tanks like we stole them and were not able to break them. We jumped them off small rocks and ran them through mulch without an issue.

The action on the turret/cannon was very cool. The turret was easily rotated via the remote, just like the cannon was easy to raise and lower.

The volume on the sound effects is adjustable which make them easy to hear outdoors or soft enough not to disturb others while indoors.

We would have liked to have seen the tanks come with rechargeable battery packs. Yes, our AA cells lasted a long time, but rechargeable is always better for a hobby grade vehicle.

While our radar gun couldn’t pick up the speed of the tanks to give you an accurate reading, we will just say they were really slow. Yes, slow is realistic and scale appropriate in this case, but if speed is your thing you will want to look elsewhere. We “estimate” their top speed at around 3 mph.

Final Verdict- We found the VS Tanks to be a lot of fun. They are an entirely different kind of fun than driving a typical rc car, but their scale realism was off the chart and playing a game of war with them had everyone smiling. If you are looking for a new way to enjoy rc, or if you are just looking to add a great looking tank to your collection, we can highly recommend the VS Tanks to you.