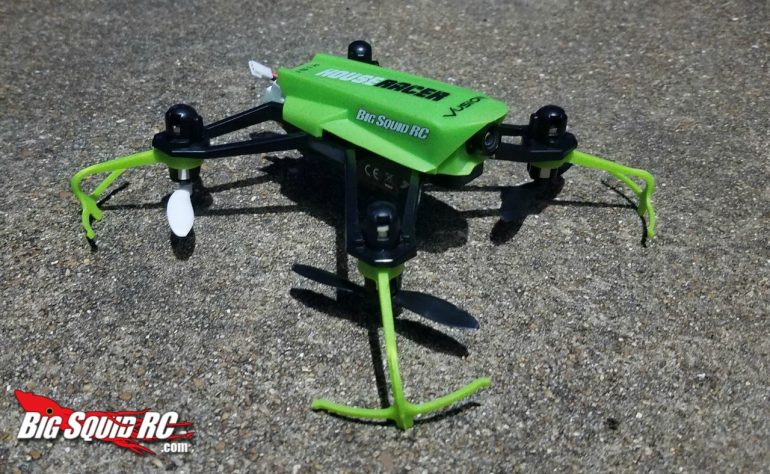 Looking to get into FPV for cheap? Boy, have I got the quad for you! I’m talking a full ready-to-fly package, with goggles and all. This isn’t one of those deals where you’ll have to wait a month to get parts either. This quad is supported by your local hobby shops. Join me while I take a ride in the Vusion House Racer.

Other Features:
There’s a sun-shield in the box to put on the monitor for sunny days.

Part Number: RISE0207
Warranty: Manufacturer defect warranty. Guaranteed to work out of the box. This warranty does not cover any damage once used.

Needed To Complete: Everything required to fly the House Racer is in the box.

Build Quality: I was fairly impressed with the build quality. It is a little on the heavy side and feels top heavy when flying, but this can be compensated for and will ultimately make you a better pilot.

Set-up Notes:  Charge your battery for the quad, and your monitor battery before attempting to fly. I would also recommend flying your house racer the first time using the monitor instead of the goggles. The reasoning behind that is if your aren’t on the right channel for video you may lose signal after 15 feet or so. It it much easier to look up from the monitor to the quad and fly it than it is to try to take your goggles off while flying.

Maneuverability: Let’s just say if you can fly this quad in tight quarters, you can fly anything. The House Racer re-trained me as a pilot. I got very comfortable flying my whoop indoors because it was so easy. Moving to the House Racer humbled me and showed me how to be a better pilot. After flying a few packs and getting used to the controls, I found myself flying better with my other quads, and even hitting tricks that I never could before.

Bumps/Whoops: This quad can take a hit or two. When I first started flying it, I crashed into everything. I crashed into the ceiling, the walls, the dog, you name it. I did run through a few props and bent the landing gear, but I never broke anything major.

Windy Weather: The House Racer is a little too heavy to be flown in a fair amount of wind. I could compensate for wind if I had a large area, but if I tried to fly in a small area outside I would get blown into objects. Now it will do just fine in some wind, but be cautious because if a stiff gust comes through then you may find yourself upside-down on the roof like I have.

Stunts: I did manage to pull off a power loop in my local hobby shop that had tall ceilings, but I wouldn’t expect to be doing stunts in the average sized home. Stunts are possible on non-windy days, but I have found that if it is windy, it is quite difficult to pull off any stunts.

Practicality: Everyone could find a use for the House Racer. Even a drone aficionado would enjoy an extra set of goggles and another drone to play with. I have been wanting to purchase one for myself ever since it came out, not because I thought it was the quad of the century, but because I knew that it would allow me to easily introduce new people into the hobby. Nothing is better than getting a non-R/C enthusiast, really excited about R/C products. Usually after getting excited, their face becomes seldom and they ask “so.. how much is it?”, this is where the House Racer really shines because when I tell them “only 179 bucks” their excitement returns.

Power: The house racer isn’t as punchy as I would have hoped. It proves to be powerful enough to handle some wind outside, but it’s not as zippy as I’m used to. It does have an impressive top speed, but cornering isn’t very impressive.

Radio: It was very refreshing to see a recreational drone package come with a substantial radio. The Rise transmitter feels very nice in the hands. The gimbals are a little sloppy, but overall the transmitter is of very good quality.

Broken Parts:  Props, Props, Props. If you find that your local hobby shop is out of House Racer props, you can always supplement for Dromida HoverShot props. Heck, buy a couple sets of both and see which ones that you like more.

When installing Hovershot props, I recommend that you insert the blade upside down on the motor shaft. The prop is going to look like it’s facing upwards even though the motors are facing down. This doesn’t look right, but it works very well.

Always kill your throttle when you are going to crash, or if you already have started to crash. Letting it fall is always better than trying to save it.

Always remember to Know Before You Fly.

Best Mod Over $5: Get a race gate system. It will change the game for you. Flying around open areas can be fun for a time but having race gates allows you to set up race courses in any set-up imaginable. You will really hone your skills as a drone pilot trying to make faster lap times. With a race gate system you can also challenge your friends to a race. I don’t have to explain why that’s awesome.

Time To Bash: A Charge the batteries and lets go. You can have fun alone or with a friend. It is super easy to get the basics down and start flying FPV with the House Racer.

Workability: A The quad can be easily worked on with the included philips screw drivers. There are only a few screws that hold everything down. Everything else plugs into the main-board. Any part can be changed out in minutes.

Quad Show Rating: B The neon green color scheme (no rhyme intended) is a good look for this particular quad. It does remind me of some kind of bug, but that’s not really a bad thing. The first thing people notice about this quad is that the rotors are facing down instead of up, and the general consensus amongst children is that it’s “really cool”. The canopy does make the quad look top heavy and disproportional, but overall it’s pretty sharp.

Bash-A-Bility: B The props get torn up quite easily because the rotor guards are flimsy. This means you should have a couple sets of props on hand. Not a huge deal because props are very inexpensive, and the quad comes with a set of additional guards for more protection. The camera does has a habit of falling off after a hard crash though.  This isn’t much of a problem because it can be easily reattached but is still a cause for concern.

Fun Factor: A  Hit it and get it. This thing is super fun for the money. It is going to be a quad that I will bring out time and time again for it’s ease of use and also because it can still challenge me. Trying to fly through a race gate while in Acro mode in the wind outside is always fun.

Handling: B When flying in tight quarters, I recommend keeping the flight mode switch all the way back and putting the D/R switch to the front. For me this was the easiest way reduce how far the drone drifts after a turn. This makes it a lot easier to fly indoors without running into everything.

Value: A People always want to get into FPV when they see me fly my race quad but shy away when I go into detail about how much money I have invested in the hobby. It can be overwhelming when I start throwing numbers out like $500, but now I can say that you can get a full FPV rig at your local hobby shop for only $179. I’ve already had people commit to buying a House Racer after seeing me fly and then learning how little it costs to get into.

Parts Availability: A Though the House Racer is fairly new there are already parts in stores. In-fact, there were parts in stores before the drone came out. This is because the props and batteries from the Dromida HoverShot work in the House Racer. This was extremely convenient for me since I already had a battery from a HoverShot that I could use as a spare.

BigSquid Rating: A- The price-point and parts support of the House Racer makes it a fine gift for the aspiring FPV pilot. I personally love having an extra set of goggles and a drone that my R/C deficient friends can fly.