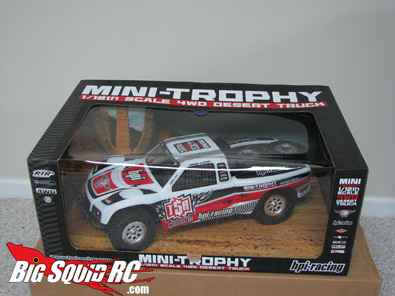 Without a doubt, the Mini Trophy Truck from HPI Racing has been making some serious waves in the RC world. It’s been probably one of the most anticipated trucks in a long time, and we got one in our hands to let you know if all the hype is warranted!

As we mentioned in our original un-boxing story, the packaging is phenomenal. The person behind it needs a serious bonus, because we just couldn’t get over how well it was done. It was cleaver, eye catching, and should really move these things off hobby shelves! 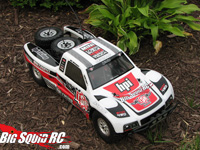 The truck itself looks great! It has a awesome scale look, and is a large reason for all the hype around it. From the detailed body, to the 2 fake tires on the back, the appearance is well presented. Inside it has a driver and navigator that sit on top of some of the electronics keeping that realistic look even when you look through the windows. Right now, scale looks are the ‘in’ thing, and it seems like this is going to be the future for a while. People are demanding more realistic vehicles, and companies like HPI Racing are starting to listen to the people! Thanks HPI! Some basic info, it’s a 1/12 scale 4WD Desert Truck. It’s comes RTR without batteries, a standard 540 motor, and you’ll probably find it for about $240 in most places.

Under the body is a very elaborate roll cage system which also adds to the realism. The roll cage wraps all the way around and is secured by many screws to the chassis. The rear of the truck cage flips up to allow access to the inside for battery changing and maintenance. This is where things get a little rough. Starting with the battery. We of course wanted to go right to LiPo and found out quickly that not just any lipo would fit easily. Because the battery has to slide in under the drive train, batteries that had top side plugs and wire connectors just didn’t work well. Even when turned around and the connectors go in first, we still had issues because there just isn’t a lot of room to work with. Batteries that had wires coming out the sides worked ok. I have to say that it was not as easy as I would of liked getting batteries in and out of the vehicle. Sitting under the drive train also caused issues because of wires rubbing and getting in the way. The esc wires were tied to the side with a zip tie, but the motor wires were not. They were rubbing right on the spinning shaft, so we zip tied them as well. The battery strap also caused some issues, you really had to get it just right to secure it over the battery, and we found out later in testing that harder landings caused it to un-secure from the front of the truck. So make sure you find a good way to secure it.

After testing in the parking lot and on the street we headed to the track. We swapped out the stock am radio with a 2.4 radio. The receiver is located under the driver, so you need to remove him to replace it. This wasn’t a big deal, but again we had to work around the roll cage. If the roll cage was designed to be removed with a couple of screws, it would of helped a lot, but as it is, there are a lot of screws holding that thing down, and in the manual they suggest doing all the work with it on, and removing all the parts out the little back hatch. My hands are not that big, and I had issues, there are a lot of people I know who wouldn’t stand a chance of working on this thing with the cage on. 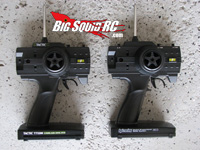 Compared to the HPI Blitz, it’s just a little bit smaller all around. We were happy to see that while the wheels and tires on the Mini Trophy Truck are smaller, you can still bolt on 1/10th scale SC size rims. Yea, it looks odd, but at least the bolt sizes are the same.

Driving the MTT is different of course then a short course truck. It’s a lot narrower, and has a lower center of gravity. You can still traction roll it (not as easily as a Slash) and when it does happen you roll like a log. Because the truck is narrow, once it starts rolling you just keep rolling.

The 4wd is great to drive because you can power around the turns well, and the front end really digs in to get you on the path you want to go. The top speed out of the box with the LiPo was 21mph which is a good speed for a truck this size.

When it comes to bashing, this truck can take a beating. We have done our usual torture tests of jumping it off every ramp we own, running it into curbs, playing demolition derby with 1/10th scale short course trucks, as well as jumping off and throwing it off the drivers stand. We have not broken a single part, and there have been some serious ‘cringe causing’ crashes.

In the air we had some issues. As soon as it leaves the ground it wants to go nose down. Sadly, even with the 4wd we didn’t have much control in the air at all. We’re used to buggy’s and the Slash 4×4 with a center diff allowing us to almost dance through the air, but not in this case. Hopefully one of the first mods out the door will be a center diff. I think the rear suspension has something to do with this also as the shock oil it comes with is pretty thin and as soon as your front end is in the air, the rear end wanted to try and launch causing us to crash land nose first instead of landing on all fours.

On the ground the truck drives great. It turns well, it leans with a nice scale look, and it has enough power to go where you want to go and take whatever line you want to get there.

We think with some work we can solve some of our in air issues. We might not get more control, but we should be able to stop it from going nose down as soon as it’s air born. Maybe if we replace the fake plastic tires on the back with real ones? 🙂
We are confident that shortly after reading this you’ll be able to find whole forum threads being dedicated to mods on this truck.

On the track, because of the size and speed, it does have some issues on a track set up for 1/10th scale and 1/8 scale vehicles. Our 21mph wasn’t getting us safely over the crossover at the local track. With the tendency to go nose down your not making too many doubles out there, so you need to pick and choose your battles wisely. If you aren’t driving it like you stole it, you can get around the track without too many issues, but for bashers who can’t take their finger off the throttle when a jump is coming, your going to learn the hard way.

Overall the truck is probably a good precursor to the look of RC for the future. We love the scale look, and it seems like so does the rest of the world. With that scale look seems to come some workability issues. The roll cage looks awesome, but it’s tough to work around. On the ground, the truck handles good, in the air it is going to take some tweaking. Un-like the Blitz that was amazing in the air out of the box, the MTT is going to take patients and tuning.

As with all of our stuff, if you see us at the track or at a bash, stop by and say hi! We’ll probably let ya drive/test whatever we seem to have our hands on. At the very least you’ll get some stickers out of it.

Workability – 7.0/10 – That roll cage gets in the way a lot, even a simple battery swap is not fun to deal with.

Big Squid Rating – 8/10 – Tentacles.. The look is great, the price is great! People will figure out mods for the jumping and battery storage issues.

Click here to see the rest of the HPI Mini Trophy Truck un-boxing pictures we posted.

Because we know people will ask, we put in some pictures of how it compares to the Duratrax DT truck.