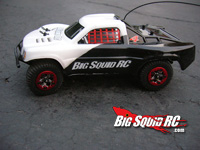 Is it fast?
Stock, the Losi Micro SCT comes with a brushed motor and 4 cell 220 mah battery. I didn’t radar the truck, but in large open spaces I’d guess it’d top out around 10 mph, and feels dreadfully slow. You may have seen the preview video Horizon put out showing this truck in action, but let me put the record straight, the truck in the video is MUCH faster than the truck you get out of the box. With that said, if you run the truck where it is intended, like lets say a living room, garage or kitchen, I fell the Micro SCT had decent power. In my “man-cave”, which has an open area of about 15′ by 15′, by the time you got up to full speed it was time to hit the brakes before hitting a wall. It felt decent indoors, not too fast, nor was it ridiculously slow in that small of an area. As far as power to get over jumps and such, that was an area that it was lacking, the motor didn’t seem to have enough torque to really launch up a jump face. There isn’t much rpm there either, so for instance if you come off a jump with the nose too low, raw rpm isn’t going to help you pull it back up. 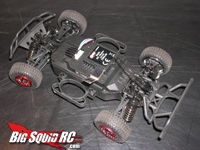 How does the speedo feel?
Not bad, but not great. It’s fairly smooth in forward and reverse, and has decent brakes. It can have a clunky delay between foward/brakes/reverse.

How is the range on the radio?
I had good range with my test Micro SCT. When I say “good”, it was at least 100 feet, which is about as far as you can accurately drive something this small. I’ve seen others on the net complaining about their range, which is also a problem I have on my personal Micro-T. My Micro-T literally has 10 foot of range, and many others are complaining about this on their new Micro SCT’s. Some have said that it’s the transmitters fault, but I’ve tested that theory first hand, and no, it’s a receiver issue. Luckily my test SCT had great range. 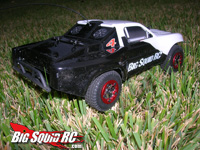 What was your runtime?
There are a couple caveats to this answer, but I was getting around 10 minutes after properly setting the pinion/spur mesh, but with a lot of extra drag due to the stock diffs not being shimmed properly. If the diffs were properly shimmed from the factory, I’d suspect the runtime would increase by at least 30% (along with a nice gain in speed).

What was wrong with the pinion/spur mesh?
Horizon must have hired Stevie Wonder to set the gear mesh on the Micro SCT’s. Out of the box, my pinion/spur mesh was set as tightly as humanly possible. While I was charging the battery up for the first run I had to set the mesh before actually running the truck. No, it isn’t hard to do, it’s really very easy, just 3 screws to loosen, but, a RTR car/truck should be able to be driven properly right out of the box. Actually, I guess my Micro SCT could have been driven, but with the mesh set that tight, it would have had no speed, crap for runtime, and the motor/speedo/battery would have gotten insanely HOT. 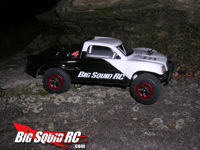 Does the truck come with a battery charger?
Yes, it’s a tiny unit that plugs into an household electrical outlet. In the manual, it states that it will fully charge the included battery in 1 hour. A 1 hour charge time is actually very fast for a wall unit, much faster than most. But, the manual also states that it does not peak detect, so it will keep charging the battery as long as you have it plugged in. During my first charge, I checked in on the pack at the 45 minute mark and I’m glad I did, as the battery was 135 Fahrenheit, which is much too hot. My advice to you is to either check the battery every 10 minutes during charging (discontinue charging when the battery is warm, but not hot to the touch), or to ditch the included unit and use a real charger. Overcharging a Ni-mh battery is one of the worst things you can do to it, and the stock Micro SCT charger has no cut off, so it’s up to you to make sure you don’t overcharge and ruin the battery.

Is the Micro SCT faster than a Micro-T?
Raw speed wise, no, it’s not. The Micro-T essentially uses the same power package as the SCT, but it’s much lighter, and has MUCH less drag, making the Micro-T quicker to accelerate, while top speeds are roughly the same. On track, the 4wd, additional width and wheelbase, and the oil shocks of the SCT help it circulate faster than a Micro-T. 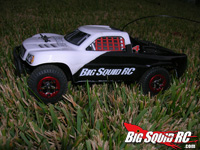 How well does the Micro SCT turn?
I think it turns well. On pavement it has a slight push at high speeds, on carpet the front tires turn into corners quite well. But, the SCT has a much wider turning radius than a Micro-T. I didn’t really find the reduced turning radius a problem, in fact I thought it helped the truck handle more predictably, and made it more noob friendly. But, these micro class trucks are made for small spaces, I think most people will be trimming some material off the steering blocks to reduce the turning radius (the stock radius is about 3 feet).

Are the included Micro SCT oil shocks any good?
Yes, they are factory works components compared to the stock non-oil shocks of a Micro-T. They seem to work very well out of the box, and I did not experience any leaking. The stock SCT oil shocks look “big bore”, and are one of the most important factors that take a truck of this size from “toy” to hobby grade.

What are the best points of the truck?
I dig the looks of the truck out of the box. IMO, sweet looking body shell, and nice looking faux bead-lock rims. The truck also drives really well, or at least much better than most others in this size category. Set up an off road track in your living room, and the truck is loads of fun to drive, when you have friends over, everyone wants a turn. This isn’t some esoteric racing rig, but it’s got some decent tech in it, and it’s just plain fun.

Lastly, while I haven’t driven the truck like I stole it, I’ve just driven it normally, but I have not broken any parts yet, perhaps the most important attribute of any truck.

How about the low points?
I’ve already mentioned most of them above- the stock gear mesh was improperly set, the stock diffs are shimmed too tight, and you’ve really got to keep a close eye not to overcharge the battery. As far as driving goes, if you buy this truck to drive outdoors or in large spaces, you’ll be disappointed. You’ll have much more fun with pretty much anything else of a larger scale.

Some may not care, but the truck doesn’t come with a 2.4ghz radio, nor would it be easy to convert to 2.4, which may be a deal breaker for some people.

Bash-A-Bility – 8/10 -No breakage yet, but mostly normal driving. Too slow for big air.

Big Squid Rating – 7.5/10 – Tentacles.. It’s a fun truck for the living room or office (after you fix it), but not so much in the big outdoors. Why does everything need to be on one board? Thought we were hobby grade, not a toy. Couldn’t just drive out of the box without work. 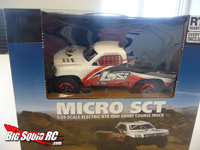